This will be the last post on this url,                    Daniel has organised a new web site for CB Electronics, modern look, and more features one of which is an integral blog that can be linked to the product pages. Here is the new url for this blog

I received the following from a USB-422 user - Peter Persaud at Foley One, Toronto, Canada

Pro Tools sees our Soundmaster but the lock time is super long now.  Almost 3-4 seconds.  I can get it to work locally from Soundmaster instantaneously if I put the ‘Allow 9-pin Transport Commands in Local Mode’but I can’t get it to chase to the Master video player.  If I take it off and just run the Remote function the system locks but again the super long 3-4 second problem.  It seems as if the Pro Tools is ‘slewing’ and trying to catch up to speed or something.  The Soundmaster says it’s locked, the Pro Tools play bar is rolling but no sound and the Stop tally is solid in Pro Tools and the Play tally is blinking for the 3 - 4 seconds like I described  Any thoughts on how I can tighten up the lock time?

The only way that the USB-422 could cause this problems is Latency, I replied

Apart from checking that the Maclow2p3.kext is active in the Mac extensions (see how in  Mac_latency.pdf) there is not much I can suggest. Latency is critical for lock up times as high latency will cause bad positional information.

Installing on High Sierra can be tricky as Apple have added extra protection (documented in our application notes) and there are often copies of the .kext in multiple locations!

However this was not the problem, after two days Pete's replied as follows

After an afternoon with a friend name Phil Seel who is a tech at Deluxe Post Production here in Toronto he remember that he discovered this year that Avid change their Serial ‘Coding’ after Pro Tools 2018.8.  I believe that is what he called it.  We installed Pro Tools 2018.7 and everything worked super fast again.

Hopefully publishing this will help others in the future
Posted by colinbroad at 16:40 14 comments:

I was recently asked the best way to add a Trinnov ST-2 to a TMC-1 system. The TMC-1 penta can be configured to have inserts in the output path which is ideal for  for this application.

The ST-2 has both Analogue and AES I/O, the obvious choice in this case is to use the AES I/O.

The ST-2 GPIO option provides remote profile selection, to simplify operation we decided to to select the ST-2 profile when the speaker set is selected by the TMC-1. This was achieved by adding speaker set selection to the GP Out 1, 2 and 3 function select in TMC-1 advanced menu's 18, 19 and 20 and connecting GP outputs on the TMC-1 to GP inputs on the ST-2.

Connections between the TMC-1 and ST-2, 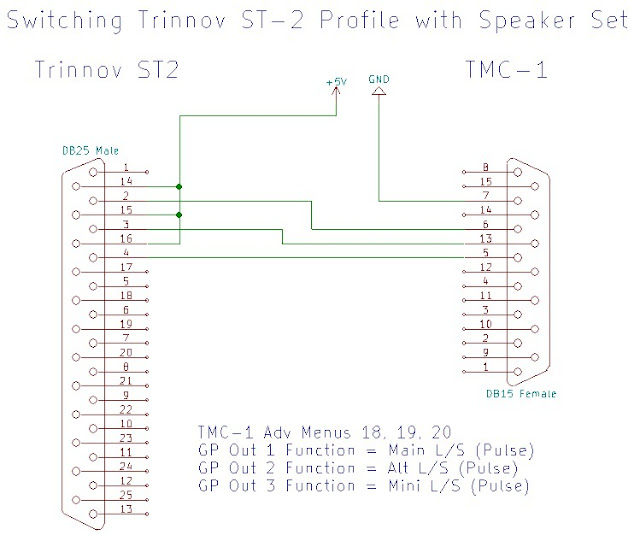 Note. 5v-24v external power supply (You can use a spare ST2 USB)
Power is required for the ST-2 Opto-coupled inputs, the TMC-1 outputs are open collector with a common ground.

Although the Penta is the only TMC-1 system with inserts, room equalization may be added after the outputs on the other systems and switched using the same GPIO's.

Posted by colinbroad at 11:51 No comments: 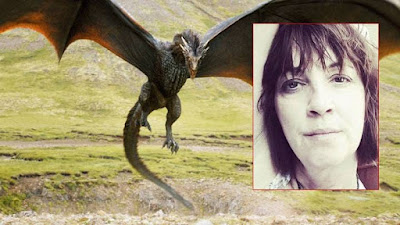 1) Connect the Headphones to the Mini L/S output - I have customers doing this.

The main advantage of option 2 is that no extra cables are required, as it uses the existing connections between the TMC-1 and A-Mon complete with a headphone socket on the TMC-1/PD-3/TMC-1-S6.

The main problem with option 2 is that the Dim, Mute keys and Gain control do not control the Headphone Cue Output! You must use the [H/P] user key as a Mute key , and hold the [H/P]  user key depressed to adjust the H/P cue gain - not an optimal solution.

[Phones] Off or select a Speaker Set

This update will be available in the next release of TMC-1-AMon software, if you wish to use it before email me for a beta version of the software.
Posted by colinbroad at 17:20 1 comment:


I am often asked questions about the differences between these different controllers all of which can control the Avid MTRX, DAD AX32 or the NTP Penta. Can they can work together and what are their requirements?

Functionally very similar these units provide digital and analog i/o, digital patch and digital summing. In the description below I will talk about the DAD to refer to all these units.

DADman is a software system for controlling signal gain, routing and summing (requires the Gain/Sum option) within the DAD. DADman requires a Windows or Mac computer to run and can be remote controlled from the Avid S6 via Eucon and/or by the MOM using a NTP protocol. The DADman software also provides metering.

Software used by the S6 to control DADman, Then S6 includes a level control and talkback key. A touch screen can be used to control other functions.

The MOM hardware Remote is connected to the DADman software via Ethernet. The MOM has 10 user programmable switches and LED's, a single knob,  the current gain is indicated by a ring of LED's around the knob.  A Layer switch is provided to select up to 4 layers indicated by a LED.  The function the switches and knob are defined for each layer within the DADman program.

Available from the apple App Store the MOM app emulates the MOM and has the advantage that the switches may be labeled by the user.

The TMC-1-Penta connects directly to the DAD. It does not require DADman to operate however DADman may be used to route other signals within the DAD.

The TMC-1-Penta I/O connections are defined on a windows or Mac computer using TMC1-Penta4 software and saved by the TMC-1-Penta.

The TMC-1 has 18 switches and one knob most of which are user programmable. It has a 4.3" TFT display that is used to indicate the current signal source, level and speaker set and 8 or 12 channel metering. The display also indicates the functions of the user keys and knob..

I am biased! I found the setup easier using the TMC-1-Penta software, once the inputs and outputs are defined the routing is configured by the TMC-1 software. You can define more esoteric systems using the DADman software, but as yet I have not found a user who needed more that the TMC-1-Penta can provide.

Posted by colinbroad at 16:53 No comments:

Preset or Scene - Whats in a name?

Whilst checking and updating the TMC-1-DMon for the latest version of the D-Mon software I found that I had labeled two user definable keys as 'Preset', Not Good!

'Scene' seems to be used more and more  to describe setup presets, I have replaced the new TMC-1 'Preset' described in recent posts with 'Scene' and replaced the 'Preset' for the  D-Mon  with 'S.Preset'.

Whilst making the updates I added D-Mon Studio Preset to the TMC-1 Scene so that when changing the studio setup it is also possible to change the D-Mon Studio Preset. Please let me know if it is necessary to include Session snapshots?
Posted by colinbroad at 10:47 No comments:

This week I have been interfacing the TMC-1 with the Yamaha MMP1. We have been waiting for a MMP1 since it was announced last year, a loan unit finally arrived last week . Before starting we had to buy a I-Pad (we are Android users and our OSC software runs on both), this arrived two days ago since then I have been writing code. 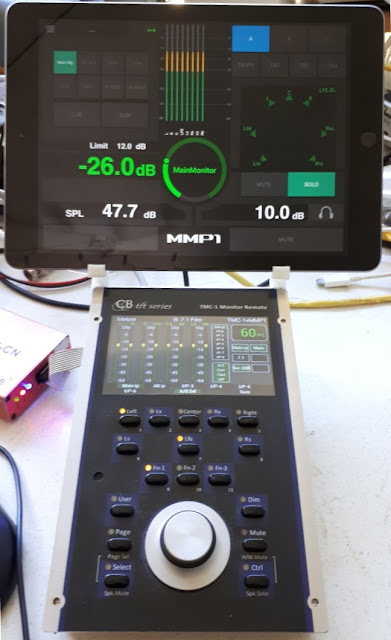 You can run the TMC-1 alone or with the MMP1 editor and/or remote. For testing I am running the TMC-1 with the Yamaha Editor and I-Pad App. The TMC-1 can activate all the controls on the Control View of the MMP1 remote App and some extra functions from the Editor.

Beta test software will be available next week, the functions already included are as follows

In the previous post I explained the new Preset selection functionality on the TMC-1. I have just added an enhanced version for the TMC-1-Penta which includes the ability to  select different groups of inputs from the Input Pallet.

The TMC-1-Penta can select between or sum up to 8 inputs which can be assigned from a pallet of 32 inputs. The new input group selection allows you to specify up to 4 groups of 8 inputs and select between them.

The table on the right is used to assign inputs from the pallet to the input groups.

A beta version of this software is available on request

Posted by colinbroad at 13:36 No comments: This week I installed the TMC-1-Penta with a Dolby RMU, although there were one or two problems the system worked correctly. I will be modi...

Comments
When comments are added to older blogs the comment indicator can take a few days to increment, however if you click on comment or look at the archive you can see them!